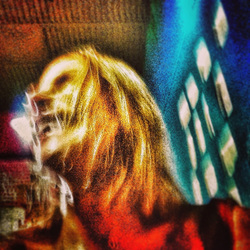 Artist Bio and CV:
Robin Apple
Artist's Statement
I'm an iPhone photographic artist living and working in the San Francisco Bay Area. I love creating abstracted, blended, collaged images featuring animals, nature, flowers, plants and other beautiful things that make me pause and wonder.
I work from start to finish using only my iPhone, then tend to print on aluminum, plexiglass, or other substrates. Recently I’ve been experimenting with brief video clips containing the elements listed above. Trained as a clinical psychologist, I tend to create work based on current emotional and cultural contexts. This year has been a hard one all around. As a positive counterpoint, I found myself creating work that includes butterflies, other snippets from nature, people, and found objects to prettify a space within a given community. Over the past year I’ve been honored and grateful to have my work accepted for various calls for art in public spaces.
​